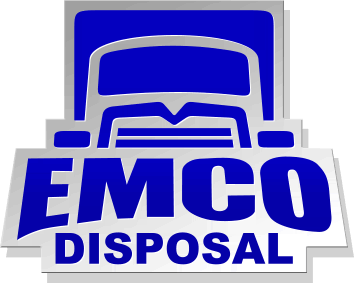 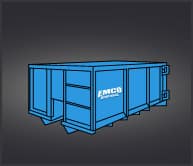 Emco offers a 14 yard container that is a great way for residential consumers to control any waste disposal and recycling. These small containers can be used for small construction projects to rubbish removal.
No mixing of any kind for dirt, concrete and asphalt. Each dumping material needs an individual bin for dirt, concrete and asphalt. Any contaminating material must be removed by customer before bin is removed. If these items are found after the bin has been dumped, a contamination charge will be applied to the customer’s account.
guidelines

We do not accept the following items in the disposal bins:

Extra dirt fill can pose a problem if you are unable to find any place to dispose of it quickly. Erosion and grass kill can set in within a matter of weeks. The mound of dirt fill can become weed-ridden within a matter of weeks. This can also lead to insect infestations, defile the surroundings and endanger the health of the inhabitants in your home.

This will eventually lead to some problems and it is best to tackle the dirt fill disposal as soon as possible. Landscapers, architects and builders make use of dirt fill for various purposes. It is used in the foundations of homes and various other structures and in landscaping as well. If the entire project is being handled by a contractor, that company will also handle the dirt fill disposal.

THINGS TO WATCH OUT FOR

In some cases, homeowners might remove the dirt fill themselves and this is when they call us. The method that is eventually used will depend on the amount of fill dirt that has to be removed and its location. Emco Disposal has years of experience with handling waste and clean fill disposal. The few things that will have to be taken into account are:

Once you have ascertained that it is safe to remove the dirt fill and have taken a decision to do so, give us a call. We will provide you with an estimate for the job. The cost of the clean fill disposal will depend on the type of equipment that will be used to remove the fill. There are times when the dirt has to be removed from hard-to-reach spaces like basements. In this case, specialized equipment might be required.

The cost of the entire job will also be dependent on the number of professionals that will be required to handle the job and the number of bins that will be needed. We have containers of varying sizes and the ones we send out to you will be based on the amount of dirt fill that has to be disposed. The 14 yards containers are large and can accommodate a lot of fill, but the exact estimate will be provided before we carry out the job.

You can identify companies or building professionals who want the clean fill as they use it for landscaping as well as building projects. Call Emco Disposal on (416) 690-4311 for dirt fill disposal in the Greater Toronto area and in the neighbouring areas of Scarborough, Vaughan, Brampton and Oakville.

Get updates on special events and receive your first drink on us!